You most likely have heard that Apple switched from Intel CPUs to their own, ARM-based CPUs.

Various early reviews touted the new MacBooks, among the first devices with the ARM-based M1 CPU, as the best computer ever. This got me curious: after years of not using any Macs, would an M1 Mac blow my mind?

In this article, I share my thoughts about the MacBook Air M1, after a year of occasional usage. 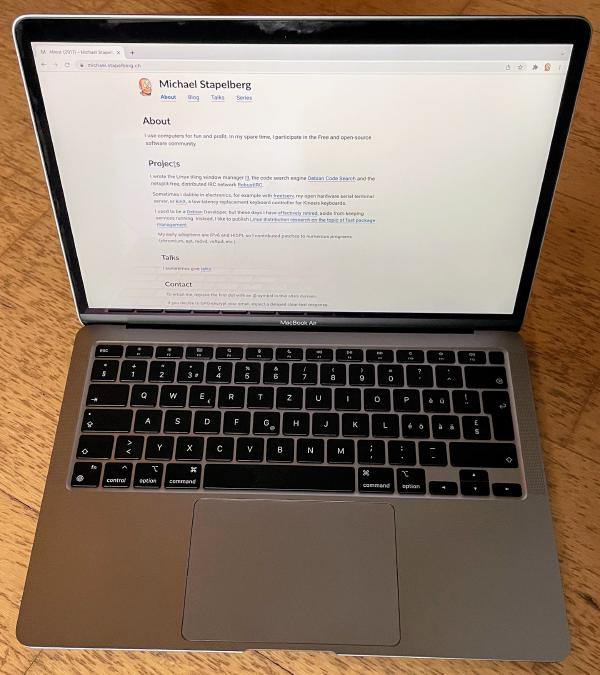 The M1 CPU is remarkably energy-efficient. This has two notable effects:

When it comes to energy efficiency, Apple sets the bar. All other laptops should be fanless, too! And the battery life really is incredible: taking notes in Google Docs (via WiFi) while at a conference for many hours left me with well over 80% of battery at the end of the day!

I briefly lent the computer to someone and got it back with a VPN client installed. The battery life was considerably shortened by that VPN client and recovered once I uninstalled it. So if you’re not seeing great battery life, maybe a single program is ruining your experience.

The fast wakeup feature that was heavily stressed during the initial introduction (to some ridicule) is actually pretty nice! I now notice having to wait for my ThinkPad to wake up.

Battery life during standby is great, too. Anecdotally, when leaving my ThinkPad lying around, it never survives until I plug it in again. The MacBook survives every single time.

Now, given that Apple controls the entire machine, does that mean they now offer features that other computers cannot offer yet?

My personal bar for this question is whether a computer can be used with my bandwidth-hungry 8K monitor, and the disappointing news is that the MacBook Air M1 cannot drive the 8K monitor with its 7680x4320 pixels resolution (at 60 Hz, using 2 DisplayPort links), not even with an external USB-C dock.

The screen is great! Everything looks sharp, colors are vibrant and brightness is good.

As usual, the touchpad (which Apple calls “trackpad”) is great, much better than any touchpad I have ever used on a PC laptop. Apple trackpads have always had this advantage since I know them, and I don’t know why PC touchpads don’t seem to get any better? 🤔

This first MacBook Air M1 model has no MagSafe. Apple added MagSafe in the MacBook Pro M1 in late 2021. I hope they’ll eventually expand MagSafe to all notebooks.

Staying in peripheral-land, let me first state that this MacBook’s 2 USB-C ports are not enough!

When working on the go, after plugging in power, I can plug in a wired ethernet adapter (wireless can be spotty), but then won’t have any ports left for my ergonomic keyboard and mouse.

For video conferencing, I can plug in power (to ensure I won’t run out of battery), connect a table microphone, but won’t have any ports left for a decent webcam. This is particularly annoying because this MacBook’s built-in webcam is really bad, and the main reason why reviewers don’t give the MacBook a perfect score (example review on YouTube).

So, in practice, you need to carry a USB-C dock, or at least a USB hub, with your laptop when you anticipate possibly needing any peripherals. #donglelife

Hardware-wise, the biggest pain point for software developers is the small amount of RAM: both the MacBook Air M1 and the MacBook Pro M1 (13") can be configured with up to 16 GB of RAM. Only the newer MacBook Pro M1 14" or 16" (introduced late 2021) support more RAM.

To be clear, 16 GB RAM is enough to do software development in general, but it can quickly become limiting when you deal with larger programs or data sets.

In my ThinkPad, I have 64 GB of RAM, which allows for a lot more VMs, large index data structures, or just plenty of page cache. With the ThinkPad, I don’t have to worry about RAM.

Of course, there are strategies around this. Maybe your projects are large enough to warrant maintaining a remote build cluster, and you can run your test jobs in a staging environment. The MacBook makes for a fine thin client — provided your internet connection is fast and stable.

I am talking about Operating Systems at a very high level in this section. Many use-cases will work fine, regardless of the Operating System one uses. I can typically get by with a browser and a terminal program.

So, this section isn’t a nuanced or fair review or critique of macOS or anything like that, just a collection of a few random things I found notable while playing with this device :)

My favorite way to install macOS is Internet Recovery. You can install a blank disk in your Mac and start the macOS installer via the internet! The Mac will even remember your WiFi password. The closest thing I know in the PC world is netboot.xyz, and that needs to be installed in your local network first.

Similarly, Apple’s integration when using multiple devices seems pretty good. For example, the Mac will offer to switch to your iPhone’s mobile connection when it loses network connectivity.

But, just like in all other operating systems, there is plenty in macOS to improve.

For example, software updates on the Mac still take 30 minutes (!) or so, which is entirely unacceptable for such a fast device! In particular, Apple seems to be (partially?) using immutable file system snapshots to distribute their software, so I don’t know why distri can install and update so much faster.

Speaking of Operating System shortcomings, I have observed how APFS (the Apple File System) can get into a state in which it cannot be repaired, which I found pretty concerning! Automated and frequent backups of all on-device data is definitely a must.

Slow software updates are annoying, and having little confidence in the file system makes me uneasy, but what’s really a dealbreaker is that my preferred keyboard layout does not work well on macOS: see Appendix A: NEO keyboard layout.

So given my preference for Linux, could I just use Linux instead?

Unfortunately, while Asahi Linux is making great progress in bringing Linux to the M1 Macs, it seems like it’ll still be many months before I can install a Linux distribution and expect it to just work on the M1 Mac.

Until then, check out the Asahi Linux Progress Report blog posts!

Apple developed the Rosetta 2 dynamic binary translator which transparently handles non-M1 programs, and so far it seems to work fine! All the things I tried just worked, and architecture never seemed to play a role during my usage.

The MacBook Air M1 is indeed impressive! It’s light, silent, fast and the battery life is amazing. If these points are the most important to you in a laptop, and you’re already in the Mac ecosystem, I imagine you’ll be very happy with this laptop.

But is the M1 really so mind-blowing that you should switch to it no matter what? No. As a long-time Linux user who is primarily developing software, I prefer my ThinkPad X1 Extreme with its plentiful peripheral connections and lots of RAM.

I know it’s not an entirely fair comparison: I should probably compare the ThinkPad to the newer MacBook Pro models (not MacBook Air). But I’m not a professional laptop reviewer, I can only speak about these 2 laptops that I found interesting enough to personally try.

The macOS implementation of the NEO keyboard layout has a number of significant incompatibilities/limitations: its layer 3 does not work correctly. Layer 3 contains many important common characters, such as / (Mod3 + i, i.e. Caps Lock + i) or ? (Mod3 + s).

I installed the current neo.keylayout file (2019-08-16) as described on the NEO download page.

In order to make / and ? work in Google Docs, I had to enable the additional Karabiner rule “Prevent all layer 3 keys from being treated as option key shortcut” (see also: this GitHub issue)

I encountered the following issues, ordered by severity:

Issue 1: I cannot use Emacs at all! I installed the emacsformacosx.com version (also tried homebrew), but cannot enter keys such as / or ?. Emacs interprets these as M-u instead.

The Karabiner rule “Prevent all layer 3 keys from being treated as option key shortcut” that fixed this issue in Google Docs does not help for Emacs. Removing it from Karabiner changes behavior, but Emacs still recognizes M-i instead of /, so it’s broken with or without the rule.

Issue 2: In the Terminal app, I cannot enable the “Use Option as Meta key” keyboard option, otherwise all layer 3 keys function as meta shortcuts (M-i) instead of key symbols (/).

I commonly use the Meta key to jump around word-wise: Alt+b / Alt+f on a PC. Since I can’t use Option + b / Option + f on a Mac, I need to use Option + arrow keys instead, which works.

Since the Option key does not work as Meta key, I need to press (and release!) the Escape key instead. This is pretty inconvenient in Emacs in a terminal.

Issue 3: In Gmail in Chrome, the search keyboard shortcut (/) is not recognized.

I reported this problem upstream, but there seems to be no solution.

I’m not sure why these programs don’t work well with NEO. I tried BBEdit for comparison, and it had no trouble with (macOS-level) shortcuts such as command + / and option + command + /.

On Linux, the NEO layout works so much better. I’m really not in the mood to continuously fight with my operating system over keyboard input and shortcuts.