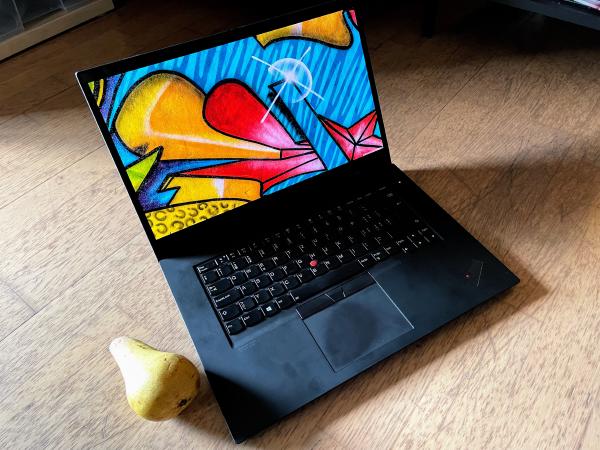 For many of my school and university years, I used and liked my ThinkPad X200 ultraportable laptop. But now that these years are long gone, I realized my use-case for laptops had changed: instead of carrying my laptop with me every day, I am now only bringing it on occasion, for example when I travel to conferences, visit friends, or do volunteer work.

After the ThinkPad X200, I used a few different laptops:

With each of these devices, I have felt limited by the lack of connectors and slim compute power that comes with the Ultrabook brand, even after years of technical progress.

More compute power is nice to be able to work on projects with larger data sets, for example debiman (scanning and converting all manpages in Debian), or distri (building Linux packages).

More peripheral options such as USB ports are nice when connecting a keyboard, trackball, USB-to-serial adapter, etc., to work on a micro controller or Raspberry Pi project, for example.

So, I was ready to switch from the heaviest Ultrabooks to the lightest of the “mobile workstation” category, when I stumbled upon Lenovo’s ThinkPad X1 Extreme (Gen 2), and it piqued my curiosity.

Let me start by going into the key peripherals of a laptop: keyboard, touchpad and screen. I will talk about these independently from the remaining hardware because they define the experience of using the computer.

After having used the Dell XPS 9360 for a few years, I can confidently say that the keyboard of the ThinkPads is definitely much better, and in a noticeable way.

On the ThinkPad keyboard, every key press lands exactly as I imagine. Never do I need to hit a key twice because I didn’t press it just-right, and never do I notice additional ghost key presses.

Even though I connect my external Kinesis Advantage keyboard when doing longer stretches of work, the quality of the built-in keyboard matters: a good keyboard enables using the laptop on the couch.

Unfortunately, while the keyboard is great, I can’t say the same about the touchpad. I mean, it’s not terrible, but it’s also not good by any stretch.

This seems to be the status quo with PC touchpads for decades. It really blows my mind that Apple’s touchpads are consistently so much better!

My only hope is that Bill Harding (GitClear), who is working on improving the Linux touchpad experience, will eventually find a magic software tweak or something…

As mentioned on the ArchWiki, I also had to adjust the sensitivity like so:

I have high demands regarding displays: since 2013, every device of mine has a hi-dpi display.

The industry hasn’t improved displays across the board as fast as I’d like, so non-hi-dpi displays are still quite common. The silver lining is that it makes laptop selection a little easier for me: anything without a decent display I can discard right away.

I’m glad to report that the 4K display in the ThinkPad X1 Extreme with its 3840x2160 pixels is sharp, bright, and generally has good viewing angles.

It’s also a touchscreen, which I don’t strictly need, but it’s nice to use it from time to time.

Tip: In case your brightness control keys don’t work, check if the required patches have not been applied in your environment yet.

Spec-wise, the ThinkPad X1 Extreme is a beast! 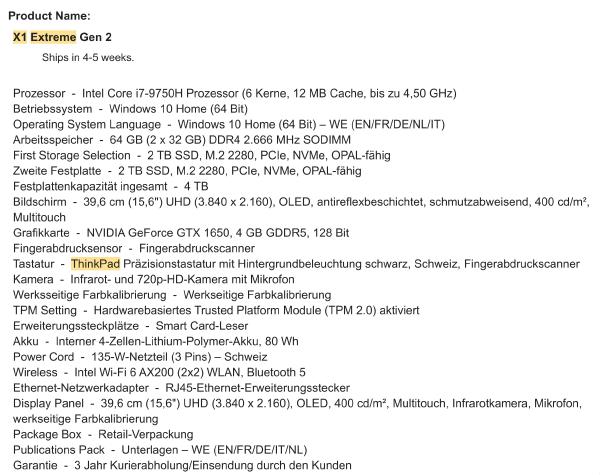 The build quality seems very robust to me.

Another big plus of the ThinkPad series over other laptop series is the availability of the official Hardware Maintenance Manual: you can put “ThinkPad X1 Extreme Gen 2 Hardware Maintenance Manual” into Google and will find p1_gen2_x1extreme_hmm_v1.pdf as the first hit. This manual describes in detail how to repair or upgrade your device if you want to (or have to) do it yourself.

I had trouble with Linux 5.6.0, and Linux 5.6.5 fixed it. Luckily, at the time of writing, Linux 5.11 is the most recent release, so most distributions should be recent enough for things to just work.

The WiFi card reaches almost the same download speed as the most modern WiFi device I can test: a MacBook Air M1. Both are connected to my UniFi UAP-AC-HD access point.

I’m not sure why the upload speed is so low in comparison.

The GPU in this machine is by far the most troublesome bit of hardware.

I had hoped that after many years of laptops containing Intel/nVidia hybrid graphics, this setup would largely work, but was disappointed.

Both the proprietary nVidia driver and the nouveau driver would not work reliably for me. I ran into kernel error messages and hard-freezes, with even SSH sessions to the machine breaking.

In the end, I blacklisted the nouveau driver to use Intel graphics only:

Without the nVidia driver, the GPU will not go into powersave mode, so I remove it from the PCI bus entirely to save power:

You can only re-awaken the GPU with a reboot.

Obviously this isn’t a great setup — I would prefer to be able to actually use the GPU. If you have any tips or a better experience, please let me know.

The 80 Wh battery lasts between 5 to 6 hours for me, without any extra power saving tuning beyond what the Linux distribution Fedora 33 comes with by default.

This is good enough for using the laptop away from a power socket from time to time, which matches my expectation for this kind of mobile workstation.

Linux support is generally good on this machine! Yes, I provide a few pointers in this article regarding problems, patches and old software versions. But, if you use a newer Linux distribution, all of these fixes are included and things just work out of the box. I tested with Fedora 33.

For a few months, I was using this laptop exclusively with my research Linux distribution distri, so even if you just track upstream software closely, the machine works well.

Lenovo partnered with the Linux Vendor Firmware Service Project (LVFS), which means that through fwupd, ThinkPad laptops such as this X1 Extreme can easily receive firmware updates!

This is a huge improvement in comparison to earlier ThinkPad models, where you had to jump through hoops with Windows-only software, or CD images that you needed to boot just right.

If your laptop has a very old firmware version (before 1.30), you might be affected by the skipping keystrokes issues. You can check using the always-handy lshw(1) tool.

The specific configuration of my ThinkPad is:

You can google for CPU benchmarks and comparisons yourself, and those likely are more scientific and carefully done than I have time for.

What I can provide however, is a comparison of working on one of my projects on the ThinkPad vs. on my workstation, an Intel Core i9-9900K that I bought in 2018:

Specifically, I am comparing how long my manpage static archive generator debiman takes to analyze and render all manpages in Debian unstable, using the following command:

On both machines, I ensured that:

Here are the results:

This reaffirms my impression that even high-end laptop hardware just cannot beat a workstation setup (which has more space and better thermals), but it comes close enough to be useful.

Notably, all of these could be improved by better power saving, so perhaps it’s just a matter of time until Linux kernel developers land some improvements…? :)