I recently bought a Nuki Opener, which “turns your existing intercom into a smart door opener”.

Unfortunately, I have had a lot of trouble getting it to work.

I finally got the device working by interjecting my own micro controller between the intercom bus and the Nuki Opener, then driving the Nuki Opener in its Analogue mode: 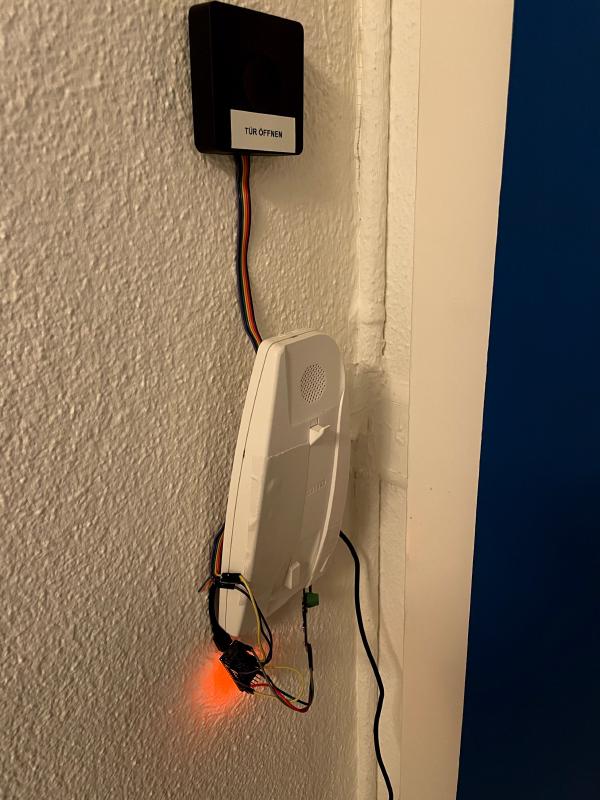 The rest of this article outlines how this setup works at a high level.

I accidentally broke a Teensy and an intercom unit while working with the SCS bus, which is specified at 27 Vdc, but my measurements show 28 volts. Please be extra careful!

An R-C network, directly connected to the SCS bus, is used for incoming signal conditioning.

The resistor values have been chosen to divide the voltage of the input signal from 28V down to approx. 2V, i.e. well within the 0-3.3V range for modern microcontroller GPIO pins.

A zener diode limits the 28V level to 3.3V, which should be safe for most microcontrollers.

We directly connect the gate of a mosfet transistor to a GPIO pin of our microcontroller, so that when the microcontroller drives the pin high, we use the 100Ω resistor to attach a load to the SCS bus.

For comparison, the KNX bus, which is similar to the SCS bus, uses a 68Ω resistor here.

Use a lab power supply to generate 28V DC. I’m using the Velleman LABPS3005SM because it was in stock at Galaxus, but any power supply rated for at least 30V DC will do.

As the DIY home automation blog entry “A minimal KNX setup” describes, you’ll need to place a 47Ω resistor between the power line and your components.

Afterwards, just connect your components to the bus. The supply/ground line of a breadboard will work nicely. 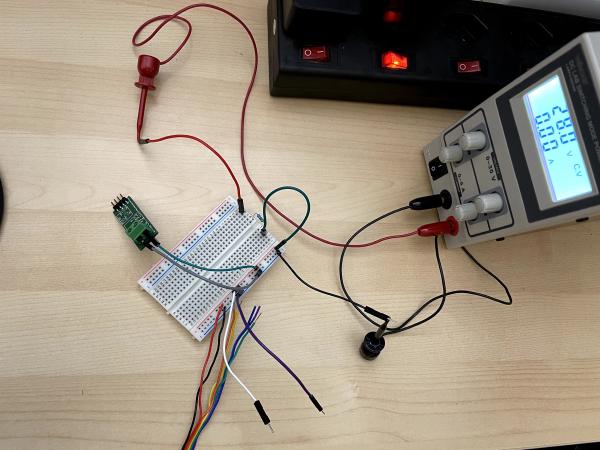 In this blog post, I’m using a Teensy 4 development board that is widely available for ≈20 USD: 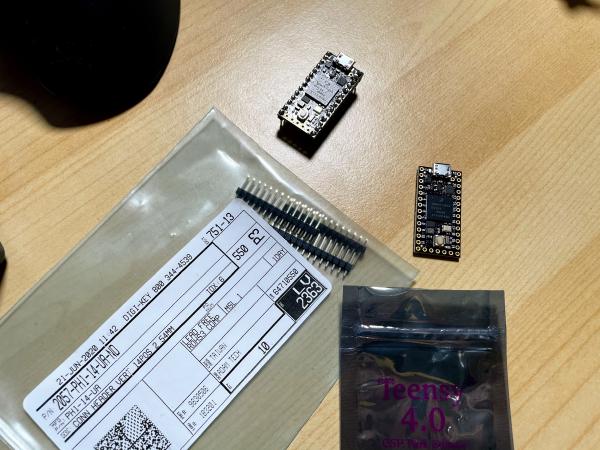 With its 600 MHz, the Teensy 4 has enough sheer clock frequency to allow for sloppier coding while still achieving high quality input/output.

The teensy tiny form factor (3.5 x 1.7 cm) works well for this project and will allow me to store the microcontroller in an existing intercom case.

The biggest downside is that NXP’s own MCUXpresso IDE cannot target the Teensy 4!

The only officially supported development environment for the Teensy 4 is Teensyduino, which is a board support package for the Arduino IDE. Having Arduino support is great, but let’s compare:

I also have NXP’s MIMXRT1060-EVK eval kit, which uses the same i.MX RT1060 micro controller family as the Teensy 4, but is much larger and comes with all the bells and whistles; notably:

Each of these points is very attractive on their own, but together they make the whole experience so different!

Being able to deploy to the Teensy from MCUXpresso would be a killer feature! So many NXP SDK examples would suddenly become available, filling the Teensy community’s gaps.

On a high level, this is how we are going to connect the various signals:

Step 2. Our SCS receive circuit takes the bus signal and divides it down to 2V: 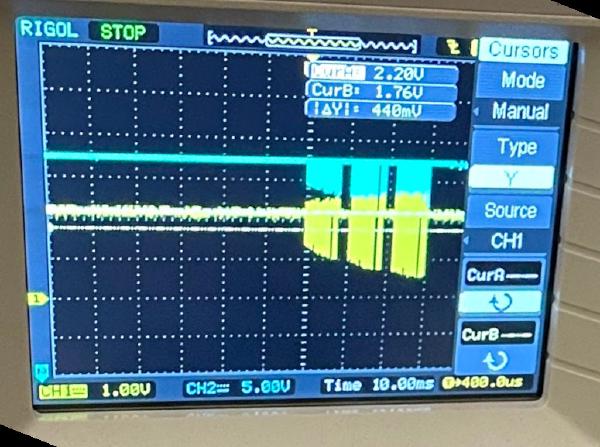 Step 3. We convert the voltage-divided analog signal into a digital SCSRXOUT signal:

Step 4. We modify our SCSRXOUT signal so that it can be sampled at 50%: 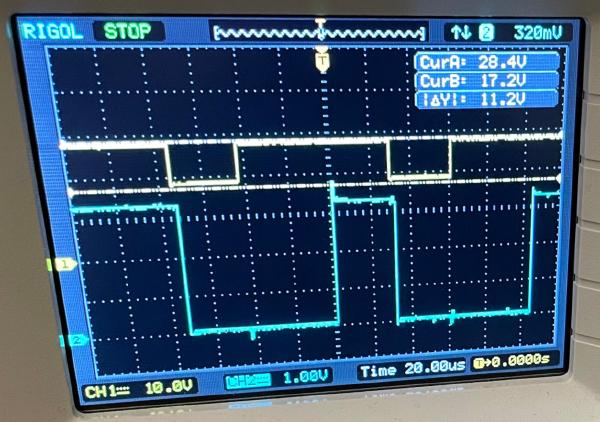 Step 5. We decode the signal using our micro controller’s UART: 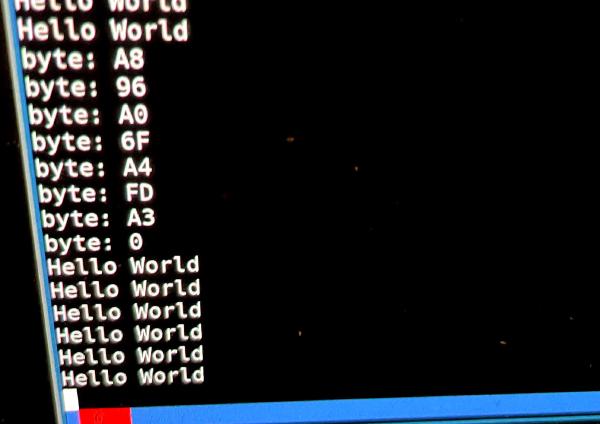 Once I complete the next revision of the SCS interface PCB, I plan to release all design files, schematics, sources, etc. in full.

Until then, the following sections describe how the most important parts work, but skip over the implementation-specific glue code that wires everything together.

The Analog Comparator in our microcontroller lets us know whether a voltage is above or below a configured threshold voltage by raising an interrupt. A good threshold is 1.65V in my case.

This signal can easily be verified by attaching an oscilloscope probe each to the SCSRX voltage-regulated bus signal input and to the SCSRXOUT GPIO pin output:

There is one crucial difference between SCS and UART:

UART implementations typically sample at 50%, the middle of the bit period.

For SCS, we would need to sample at 20%, because the signal returns to high so quickly.

While setting a custom sample point is possible in e.g. sigrok’s UART decoder, neither software nor hardware serial implementations on micro controllers typically support it.

On a micro controller it is much easier to just modify the signal so that it can be sampled at 50%.

In practical terms, this means modifying the acmp1_isr function to return to high later than the Analog Comparator indicates:

You can now read this signal using your laptop and a USB-to-serial adapter!

On a micro controller, we now feed this signal back into a UART decoder. For prototyping, this can literally mean a jumper wire connecting the output GPIO pin with a serial RX pin. Some micro controllers also support internal wiring of peripherals, allowing you to get rid of that cable.

With the SCS intercom bus signal bytes now available through the UART decoder, we can design a streaming SCS decoder. The decoder self-synchronizes and skips invalid SCS telegrams by checking their checksum. We start with a ring buffer and a convenience working copy:

Each byte we receive from the UART, we store in our ring buffer:

After every byte, we can check if the ring buffer decodes to a valid ring signal SCS bus telegram:

Conceptually, writing serial data to a GPIO output from software is done with e.g. the Arduino SoftwareSerial library, but there are plenty of implementations for different micro controllers. This technique is also sometimes called “Bit banging”.

I started with the the Teensy SoftwareSerial::write implementation and modified it to:

How is the Nuki Opener?

It took over 2 months before I saw the Nuki Opener working correctly for the first time.

I really hope the Nuki developers can work with what I described above and improve their product’s reliability for all customers with an SCS intercom system!

The device itself seems useful and usable, but time will tell how reliable it turns out in practice. I think I noticed push notifications when the door rang coming in rather late (many seconds later).

I’ll keep an eye on this and explore the various Nuki APIs more.