This post is part of a series of posts about the kinX project.

10 years ago I got a Kinesis Advantage keyboard. I wrote about the experience of learning to touch-type using the ergonomic NEO layout in my (German) post “Neo-Layout auf einer Kinesis-Tastatur”.

The Kinesis Advantage is still the best keyboard I’ve ever used, and I use one every day, both at the office and at home.

I had two reasons to start modifying the keyboard:

I solved issue ① with the help of the excellent Kinesis technical support, who sold me unpopulated PCBs so that I could solder on my own key switches.

Then, the topic of input latency popped into my filter bubble, with excellent posts such as Pavel Fatin’s “Typing with pleasure”. I started wondering what input latency I was facing, and whether/how I could reduce it.

Given that I was using a custom keyboard controller, it was up to me to answer that question. After trying to understand and modify the firmware I had been using for the last 4 years, I realized that I first needed to learn much more about how keyboards work.

I firmly believe that creating a good environment is vital for development, especially for intrinsically-motivated side projects like this one. Hence, I set the project aside until a colleague gifted me his old Kinesis which had intermittent issues. I removed the electronics and started using that keyboard as my development keyboard.

A keyboard controller has 3 major tasks:

Here’s an illustration of the timing of a key press being handled by a naive keyboard controller implementation:

Depending on the implementation, the key press now sits in a data structure, waiting for the debounce time to pass.

Finally, once the key press was successfully debounced, the device must wait until the USB host polls it before it can send the HID report.

Unless the matrix scan interval is coupled to the USB poll interval, the delays are additive, and the debounce time is usually constant: in the best case, a key press happens just before a matrix scan (0ms) and gets debounced (say, 5ms) just before a USB poll (0ms).

My old keyboard controller used the Teensy++, which is fairly dated at this point. I decided a good start of the project would be to upgrade to the current Teensy 3.6, cleaning up the schematics on the way. 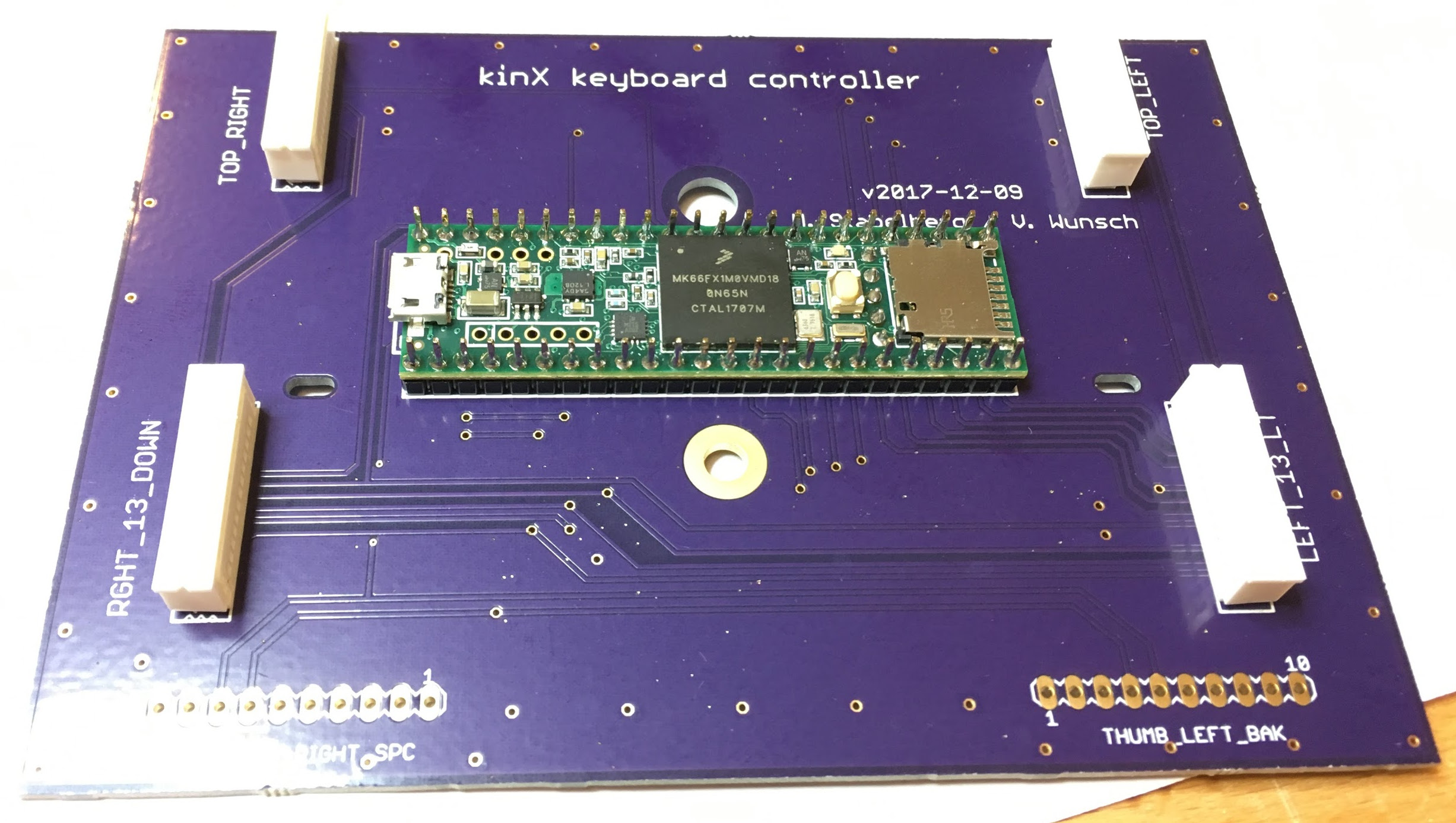 To ensure I understand all involved parts, I implemented a bare-metal firmware almost from scratch: I cobbled together the required startup code, USB stack and, most importantly, key matrix scanning code.

In my firmware, the Teensy 3.6 runs at 180 MHz (compared to the Teensy++’s 16 MHz) and scans the keyboard matrix in a busy loop (as opposed to on USB poll). Measurements confirmed a matrix scan time of only 208μs (0.2ms).

Update: Previously, I had measured the matrix scan time as 100μs (0.1ms). While that is technically correct, in practice, matrix scans take longer due to interrupts, so the new 208μs measurement is more realistic.

I implemented debouncing the way it is described in Yin Zhong’s “Keyboard Matrix Scanning and Debouncing”: by registering a key press/release on the rising/falling edge and applying the debounce time afterwards, effectively eliminating debounce latency.

Note that while the Cherry MX datasheet specifies a debounce time of 5ms, I found it necessary to increase the time to 10ms to prevent bouncing in some of my key switches, which are already a few years old.

Can we reduce the input latency even further? The biggest factor is the USB poll interval.

While the software support was a road block which could conceivably be solved, I also faced a mechanical problem: the available space in the Kinesis keyboard and the position of the USB High Speed port pins on the Teensy 3.6 unfortunately prevented installing any sort of breakout board to actually use the port.

I decided to move from the Teensy 3.6 to my own design with the same microcontroller. 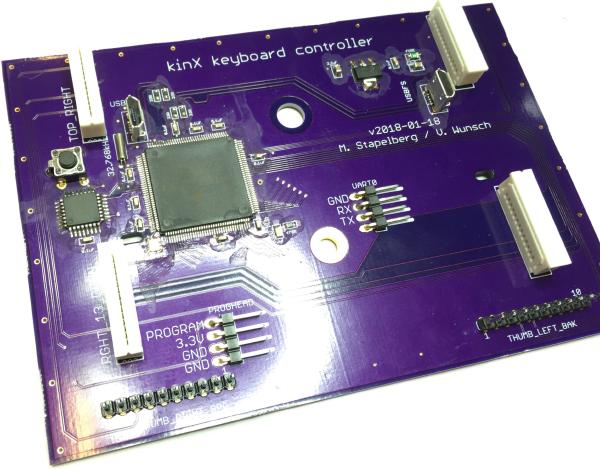 To make development pleasant, I connected a USB-to-serial adapter (to UART0) and a “rebootor” (to PROGHEAD): another Teensy with a special firmware to trigger programming mode. This way, I could set my editor’s compile-command to make && teensy_loader_cli -r …, compiling the code, uploading and booting into the resulting firmware with a single keyboard shortcut.

I based the firmware for this controller on NXP’s SDK examples, to ensure I get a well-tested and maintained USB stack for the USBHS port. I did some measurements to confirm the stack does not add measurable extra latency, so I did not see any value in me maintaining a custom USB stack.

The firmware can be found at https://github.com/kinx-project/mk66f-fw

The hardware can be found at https://github.com/kinx-project/mk66f-hw