Hacking your own Kinesis keyboard controller (2013)

Update: The kinT kinesis keyboard controller from 2020 is an updated version, with several improvements over the older 2013 design!

The Kinesis Advantage Contoured is an ergonomic keyboard which I have been using for four years. It has many features that make it a great keyboard, and it’s certainly the best I have ever used.

However, as you can also read on many places on the internet, many users have a tiny problem with the keyboard: the modifier keys sometimes get stuck. For example, you press Shift, followed by A, release Shift, press n. What appears on your screen is AN instead of An. You can only get out of this state when pressing Shift once again. It seems like the firmware doesn’t register the key release.

Last year, I decided to write Kinesis about it and they offered me a firmware upgrade. I was surprised to learn that a firmware upgrade actually means getting shipped a new microcontroller with a new firmware on it :-). After swapping the microcontroller, I noticed that the problem did not appear as often as it used to, but it still appeared. Of course, that is not satisfactory for perfectionists and heavy keyboard users :-).

The Humble Hacker Keyboard is a project by David Whetstone, who started out his project by modifying existing keyboards, amongst them the Kinesis Contoured. Thankfully, he documented his modifications in his blog.

After reading what he did, I decided to replicate his approach and swap the electronics of my Kinesis. It seemed reasonably straight-forward: Use a Teensy++ 2.0 USB development board, connect the different parts of your Kinesis to it and use David’s Open Source firmware. So I ordered the Teensy++ and had a look at how to modify my Kinesis so that I could test whether everything works before destructively modifying the keyboard. 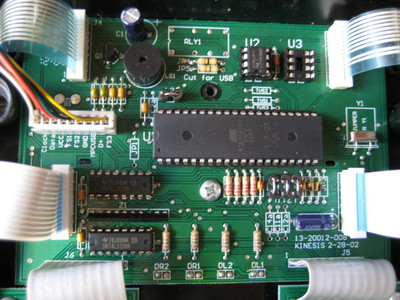 In comparison to David’s version of the Kinesis Contoured, my version was newer and used flex connectors for connecting the left/right keyboards to the controller board, as you can see on the picture above. Thankfully, Kinesis is very friendly to the enthusiast community around its products. Rick revealed that they are using the Cvilux CF01131V000 flex connectors. Unfortunately, it seems impossible to order just a few Cvilux parts to Europe. 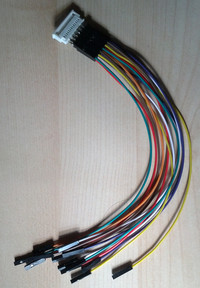 From an earlier modification I still had a few spare Kinesis parts lying around, so I decided to unsolder the flex connectors from those for a quick test. Unfortunately, the grid of the flex connectors is different from the usual 2.54mm grid, so you cannot simply use such a connector on a breadboard. Volker came up with the idea of soldering a pin header directly to it, and that worked (see the picture). I then used a bunch of jumper wires to connect the flex connector to the Teensy++ and then the Kinesis keyboard parts to the flex connector. After flashing the firmware, I could press keys on the Kinesis and have them appear on my screen. Yay! :-)

Given that I could not order the Cvilux flex connectors directly, I spent quite a bit of research into finding a compatible part. In the end, I found and used the Molex 39-53-2135 which you can order from RS components. They even have free shipping for students :-).

Now that the proof of concept was done, it was time to design a prototype board on which I can mount the Teensy++ and connect all the Kinesis keyboard parts — essentially, one could call it a break-out board for the Teensy++. It really doesn’t contain any electronics.

I created the layout and board files with the free version of CadSoft EAGLE, based on David’s descriptions in his blog posts. I am not very experienced in EAGLE, so thankfully my friend Moritz helped out with creating an EAGLE library for the Molex flex connector and cleaning up my board.

We then milled the prototype board at Volker’s lab and soldered the flex connectors and pin headers on the prototype board. Here are two pictures of the board, one before soldering and the other one after putting it into the Kinesis: 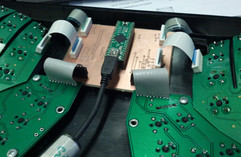 Note that the thumb keyboards don’t use a flex connector — they are soldered directly onto the controller board :-(. We decided to solder them to a pin header so that we can connect and disconnect them at will.

After connecting the prototype board, most of the keyboard worked properly. There unfortunately was one little mistake in the layout (and subsequently in the board), which we were able to correct with a bit of wire. I then decided to leave the prototype board in to test it for a bit of time until the PCBs were manufactured and delivered.

Unfortunately, we only noticed that there have to be two holes in the center of the board in order to be able to actually close the keyboard case. Furthermore, the microcontroller doesn’t have a lot of space, so you need to be careful when designing a board. I decided to eat my own dogfood and leave the Kinesis half-open for a while.

Now that it was clear that the idea basically works, Volker and I decided to take measurements of the original board and design a proper board — with holes in it and LEDs on it. It took Volker about two hours to route the board, and the result looks pretty good. 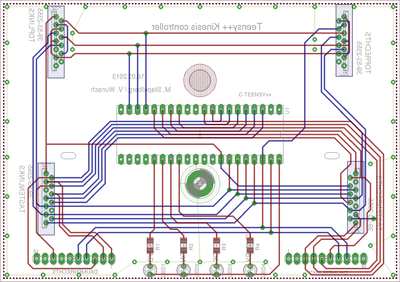 Afterwards, we submitted the board file to BILEX-LP, a cheap PCB manufacturer in Bulgaria. It took them a few working days to manufacture the board and a few more for shipping it, but it finally arrived about two weeks after we placed the order. You can see the PCB on the picture below: 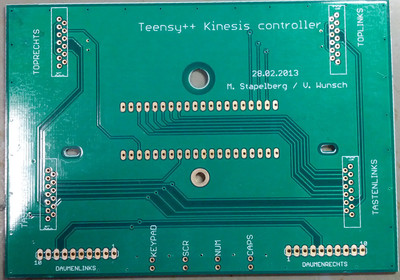 Of course, not everything was perfect, both with our board file and with the manufacturing:

So all in all, the PCB is usable, even though it’s not perfect. I then soldered the ports onto it and we placed it in my Kinesis. Note: the Teensy++ faces the board, so the USB connector is also facing the board. Therefore, we plugged in the USB cable and positioned it so that the connected cable fits, then soldered it onto the pin header. 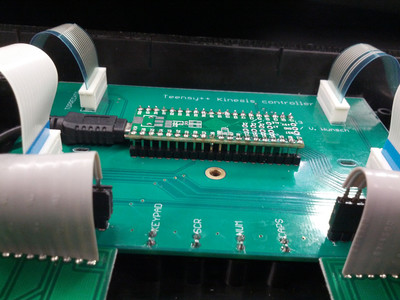 For the USB connection, Volker suggested to just rip out the board on the other side of the Kinesis case, then cut the cable and directly solder a USB cable to it. That way, we re-use the original Kinesis strain-relief and their cable, which is a pretty good idea. You can see the result here:

As expected, David’s Humble Hacker Keyboard firmware does not suffer from the stuck-modifier bug that motivated me to start this whole modification in the first place. However, I noticed that some key presses were registered twice, so I implemented debouncing and sent a pull request. The whole implementation was finished surprisingly quickly, the code really is pretty clean and easy to understand.

You can find my version of the firmware at https://github.com/stapelberg/kinesis-firmware. You can also download the .hex firmware image that you can flash on your Teensy++ — but beware: I use neo-layout.org, so I remapped all the keys in the firmware :-).

Update: I switched to a a .hex firmware image which uses the US layout (with Escape/Delete swapped and Super_L on Home) and now do my remapping in the operating system.

The layout and board files

In case you also want to replace the controller board of your Kinesis, or as a foundation for similar projects, here are the EAGLE files:

I have sold all the spare PCBs that I had. In case you want to order a batch (about 80 USD for 3 boards, that’s the minimum), you can order the kinesis PCB at oshpark.com. Please let me know how the quality is if you decide to do that, but I’ve heard only good things so far :-).

Of course it was not strictly necessary to build my own keyboard controller. I could have just lived with the bug. But it was fun and it’s a great feeling to have a (mostly) selfmade keyboard with an Open Source firmware to type on :-).

The total amount of time spent on this project was about a full work week.

I also want to say a big thank you to David Whetstone for publishing his experiments and firmware, to Moritz Augsburger for the help with the early EAGLE files and last but not least to Volker Wunsch who spent a lot of time with me and helped me a lot in order to get this project done.