This post is the second article in a series of blog posts about rsync, see the Series Overview.

Now that we know what to use rsync for, how can we best integrate rsync into monitoring and alerting, and on which operating systems does it work?

Once you have one or two important rsync jobs, it might make sense to alert when your job has not completed as expected.

I’m using Prometheus for all my monitoring and alerting.

To integrate rsync with the Prometheus Pushgateway, I wrote rsyncprom, a small tool that wraps rsync, or parses rsync output supplied by you. Once rsync completes, rsyncprom pushes the rsync exit code and parsed statistics about the transfer to your Pushgateway.

First, I set up the Prometheus Pushgateway (via Docker and systemd) on my server.

Then, in my prometheus.conf file, I instruct Prometheus to pull data from my Pushgateway:

Finally, in backups.rules.yml, I configure an alert on the time series rsync_exit_code:

This alert will fire any time an rsync job monitored via rsyncprom exits with a non-zero exit code.

On each machine that runs rsync jobs I want to monitor, I first install rsyncprom:

Then, I just wrap rsync transfers where it’s most convenient, for example in my crontab(5) :

You can also provide rsync output from Go code (this example runs rsync via SSH).

The rsync scheduler runs on a Raspberry Pi running gokrazy. The scheduler invokes the rsync job to back up websrv.zekjur.net via SSH and sends the output to Prometheus, which is running on a (different) server at an ISP. 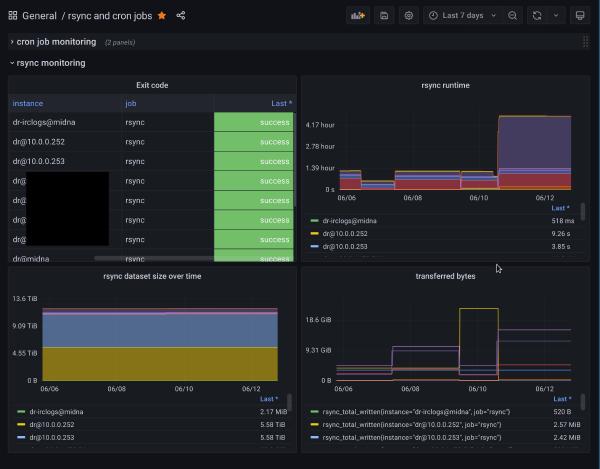 Now that we have learnt about a couple of typical use-cases, where can you use rsync to implement these use-cases? The answer is: in most environments, as rsync is widely available on different Linux and BSD versions.

Macs come with rsync available by default (but it’s an old, patched version), and OpenBSD comes with a BSD-licensed implementation called openrsync by default.

On Windows, you can use the Windows Subsystem for Linux.

The third article in this series is rsync, article 3: How does rsync work?. With rsync up and running, it’s time to take a peek under the hood of rsync to better understand how it works.