I finally managed to get my hands on some DDR5 RAM to complete my Intel i9-12900 high-end PC build! This article contains the exact component list if you’re interested in doing a similar build. 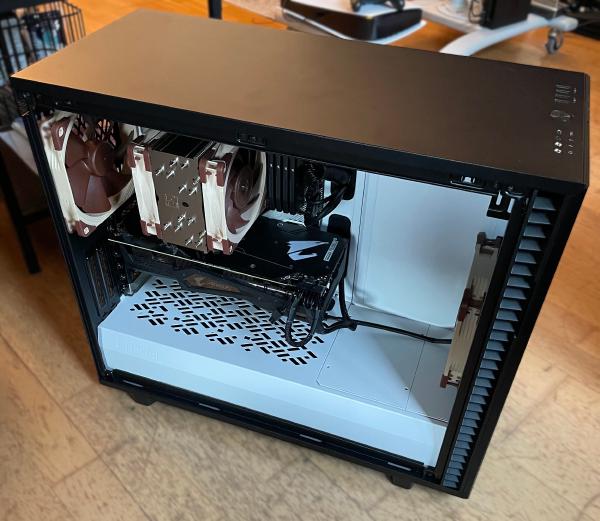 Usually, I try to stay on the latest Intel CPU generation when possible. But I decided to skip the i9-10900 (Comet Lake) and i9-11900 (Rocket Lake) series entirely, largely because they were still stuck on Intel’s 14nm manufacturing process and didn’t seem to offer much improvement.

The new i9-12900 (Alder Lake) delivered good benchmark results and is manufactured with the much newer Intel 7 process, so I was curious: would an upgrade be worth it?

The Noctua NH-U12A CPU fan required an adapter (“Noctua NM-i17xx-MP78 SecuFirm2 mounting kit”) to be compatible with the Intel LGA1700 socket. I requested the adapter on Noctua’s Website on November 5th, and it arrived November 26th.

Anytime you need to access a PC’s components, you’ll deal with its case. Especially for a self-built PC, the case you chose determines how easy it is to assemble and later modify your PC.

Over the years, I have come to value the following aspects of a PC case:

I have been using Fractal cases for the past few years and came to generally prefer them over other brands because of their good build quality.

Hence I’m happy to report that the Fractal Define 7 (their latest generation at the time of writing) ticks all of the above boxes!

The case and power supply work well together in terms of cable management. It was a joy to route the cables.

It’s very easy to open the case doors (they clip in place), or remove the front panel. This is definitely the best PC case I have seen so far in terms of quick and easy access.

Here’s how clean the inside looks. Most cables are routed with very short ways to the back, where the case offers plenty of convenient cable guides: 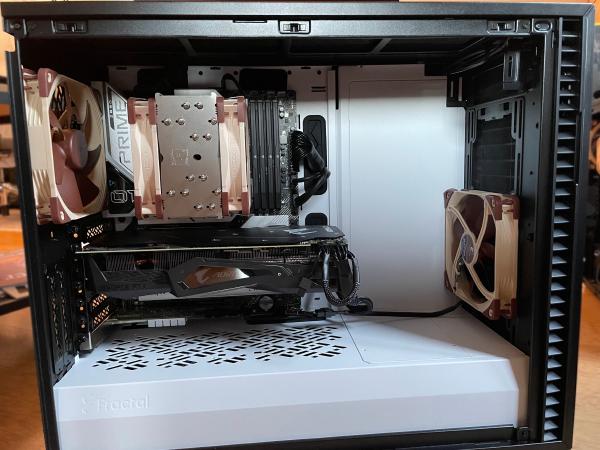 When I first powered everything on, I waited for a while, but never saw any picture on my monitor. The PC eventually rebooted, multiple times in a row. I took that as a bad sign and turned it off to prevent further damage.

Turns out I should have just waited until it would eventually start up!

It took multiple minutes for the machine to eventually start. I’m not 100% sure what the cause is for that, but I heard in a Linus Tech Tips YouTube video that DDR5 requires time-consuming memory testing when powering up with a fresh memory configuration, so that seems plausible.

In any case, my advice is: be patient when waiting for this machine to start up.

I originally ordered all components on November 5th 2021. It took a while for the mainboard to become available, but almost everything shipped on November 15th — except for the DDR5 RAM.

Until Late December, I was not able to find any available DDR5 RAM in Switzerland.

The shortage is so pronounced that some YouTubers recommend going with DDR4 mainboards for now, which manufacturers are scrambling to introduce in their lineups. I did really want to squeeze out the last few extra percent in memory-intensive workloads, so I decided to wait.

Where possible, I like only changing one thing at a time. In this case, I wanted to change the hardware, but keep using my Linux installation as-is.

To copy my Linux installation over, I plugged my old M.2 SSD into the new machine, and then started a live Linux environment, so that neither my old nor my new SSD were in use. My preferred live Linux is grml (current version: 2021.07), which I copied to a USB memory stick and booted the machine from it.

In the grml live Linux environment, I copied the full M.2 SSD contents from old to new:

For some reason, the transfer was super slow. Last time I transferred the contents of a Samsung 960 Pro to a Samsung 970 Pro, it took only 16 minutes. But this time, copying the Force MP600 to a WD Black SN850 took many hours!

Once the data was transferred, I unplugged the old M.2 SSD and booted the system.

I figured it should be safe to try out the XMP option because it is shown as part of ASUS’s “EZ Mode” welcome page in the UEFI setup.

So far, I have not noticed any issues when running the system with XMP enabled.

Update February 2022: I have experienced weird crashes that seem to have gone away after disabling XMP. I’ll leave it disabled for now.

The Fractal Define case comes with a built-in fan controller.

I recommend not using the Fractal fan controller, as you can’t control it from Linux!

Instead, I have plugged my fans into the mainboard directly.

In the UEFI setup, I have configured all fan speeds to use the “silent” profile.

With Linux 5.15.11, some fan speeds and temperature are displayed, but oddly enough it only shows 2 out of the 3 fans I have connected:

Unfortunately, writing to the /sys/class/hwmon/hwmon2/pwm2 file does not seem to change its value, so I don’t think one can control the fans via PWM from Linux (yet?).

I have set all fans to silent in the UEFI setup, which is sufficient to not notice any noise.

After cloning my old disk to the new disk, I took the opportunity to run a few time-intensive tasks from my day-to-day that I could remember.

On both machines, I configured the CPU governor to performance for stable results.

Keep in mind that I’m comparing two unique PC builds as they are (not under controlled and fair conditions), so the results might not necessarily be representative. For example, it seems like the SSD performance in the old machine was heavily degraded due to a incorrect TRIM configuration.

As we can see, in all of my tests, the new PC achieves measurably better times! 🎉

Not only in the benchmarks above, but also subjectively, the new machine feels fast!

Already in the first few days of usage, I notice how time-consuming tasks such as tracking down a Linux kernel issue (requires multiple Linux kernel builds), are a little less terrible thanks to the faster machine :)

The Fractal Define 7 case is great and will likely serve as a good base for upgrades over the next couple of years, just like its predecessor (but perhaps even longer).

As far as I can tell, the machine works well and is compatible with Linux.