During my work on Teensy 4.1 support in ChibiOS for the QMK keyboard firmware, I noticed that ChibiOS’s virtual serial device USB demo would sometimes print garbled output, and that I would never see the ChibiOS shell prompt.

This article walks you through diagnosing and working around this issue, in the hope that it helps others who are working with micro controllers and USB virtual serial devices.

While conceptually simple, the requirement for an extra piece of hardware (USB-to-serial adapter) is annoying. If your micro controller has a working USB interface and USB stack, a popular alternative is for the micro controller to provide a virtual serial device via USB.

This way, you just need one USB cable between your micro controller and computer, reusing the same connection you already use for programming the device.

A popular choice within this solution is to provide a device conforming to the USB Communications Device Class (CDC) standard, specifically its Abstract Control Model (ACM), which is typically used for modem hardware.

On Linux, these devices show up as e.g. /dev/ttyACM0. In case you’re wondering: /dev/ttyUSB0 device names are used by more specific drivers (vendor-specific). The blog post What is the difference between /dev/ttyUSB and /dev/ttyACM? goes into a lot more detail.

One unfortunate side-effect of using a modem standard to provide a generic serial device is that modem-related software might mistake our micro controller for a modem.

Use the following command to disable ModemManager until the next reboot, which otherwise might open and probe any new serial devices:

With a regular, non-USB serial interface, you can send data at any time. If nobody is receiving the data on the other end, the micro controller doesn’t care and still writes serial data.

With a USB serial, however, the host will not transfer data from the device until the serial interface is opened. This means that writes to the USB serial can block, whereas writes to the UART serial will not block but may go ignored if nobody is listening.

So when I open the USB serial interface, I would expect to see the ChibiOS shell prompt like above. Instead, I would often not see any prompt at all, and I would even sometimes see garbled output like this:

Wireshark allows us to analyze USB traffic in combination with the usbmon Linux kernel module.

Looking through the captured packets, I noticed unexpected packets from the host (computer) to the device (micro controller), specifically containing the following bytes:

Seeing any packets in this direction is unexpected, because I am only opening the serial interface for reading, and I am not consciously sending anything. So where do the packets come from?

When the shell receives a line break, it prints a new prompt. This seems to be the reason why I’m seeing garbled data: while the output is transferred to the host, line breaks are received, causing more data transfers. It’s as if somebody was hammering the return key really quickly.

When echoing is enabled, the ChibiOS shell banner triggers echo characters, which in turn are interpreted as input to the shell, causing garbled output.

So why is echoing enabled? Wouldn’t a terminal emulator turn off echoing first thing?

Yes. But, when the CDC ACM driver receives the first data transfer via USB (already queued), the standard tty settings are still in effect, because the application did not yet have a chance to set its tty configuration up!

This can be verified by running the following command on a Linux host:

Even though the command’s sole purpose is to configure the tty, its opening of the device still causes the banner to print, and echoing to happen, and garbled output is the result.

It turns out this is a somewhat common problem. Hence, the Linux USB CDC ACM driver has a quirks table, in which devices that print a banner select the DISABLE_ECHO quirk, which results in the CDC ACM driver turning off the echoing termios flag early:

So, a quick solution to turn off echoing early is to change your USB vendor and product id (VID/PID) to an ID for which the Linux kernel applies the DISABLE_ECHO quirk, e.g.:

This issue turned out to be specific to the terminal emulator program I’m using. For many years, I have been using Screen for serial devices of any sort.

I was surprised to learn during this investigation that Screen flushes any pending output when opening the device. This typically isn’t a problem because adapter-backed serial devices are opened once and then stay open. USB virtual serial devices however are only opened when used, and disappear when loading new program code onto your micro controller.

I verified this is the problem by using cat(1) instead, with which I can indeed see the prompt:

After commenting out the flush call in Screen’s sources, I could see the prompt in Screen as well.

Tip: During the review phase of this article, tio was pointed out to me as a terminal program which automatically reconnects. This won’t help with the problem at hand, but seems handy nevertheless.

Now that we no longer flush the prompt away, why is the spacing still incorrect, and where does it go wrong?

We would have expected "\r\nChibiOS/RT Shell\r\nch> " instead, meaning all Carriage Returns (\r) have been translated to Newlines (\n).

This is again due to the Linux tty driver’s default termios settings: c_iflag enables option ICRNL by default, which translates CR (Carriage Return) to NL (Newline).

Unfortunately, contrary to the DISABLE_ECHO quirk, there is no corresponding quirk in the Linux ACM driver to turn off line ending conversion, so a fix would need a Linux kernel driver change!

At this point, we have covered a few problems that would need to be fixed:

Time for a quick reality check: this seems too hard and too long a time for all parts of the stack to be fixed. Is there an easier way, and why don’t others run into this problem? If only the device didn’t print its banner so early, that would circumvent all of the problems above, too!

Luckily, the host actually notifies the device when a terminal emulator program opens the USB serial device by sending a CDC_SET_CONTROL_LINE_STATE request. I verified this behavior on Linux, Windows and macOS.

So, let’s implement a workaround in our device code! We will delay starting the shell until:

In our main.c loop, we wait until USB is active, and until we receive the first CDC_SET_CONTROL_LINE_STATE request because the serial port was opened:

And in our usbcfg.c, when receiving a CDC_SET_CONTROL_LINE_STATE request, we will reset the semaphore to non-blockingly wake up all waiters:

Aside from Linux, I also verified the workaround works on a Mac (with Screen): 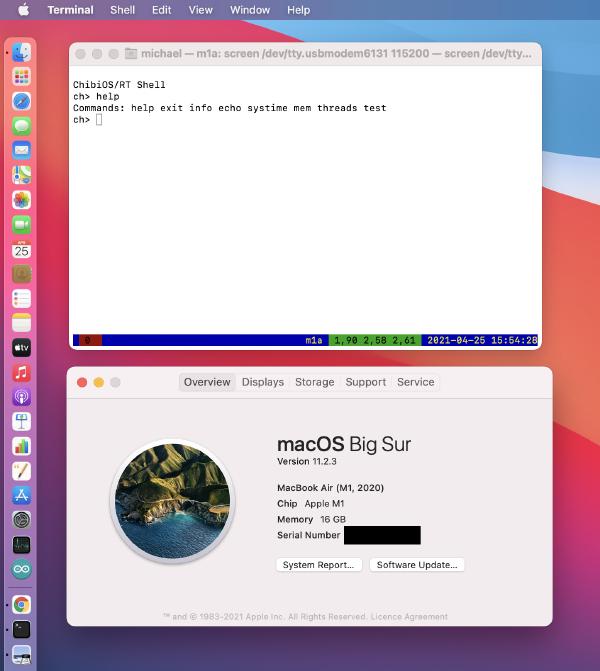 …and that it works on Windows (with PuTTY): 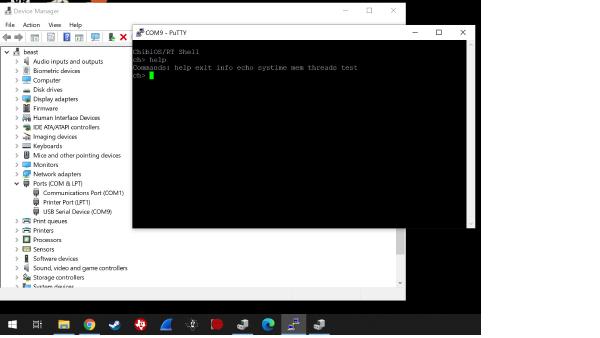