NXP’s Eclipse-based MCUXpresso IDE is the easiest way to make full use of the hardware debugging features of modern NXP micro controllers such as the i.MX RT1060 found on the NXP i.MX RT1060 Evaluation Kit (MIMXRT1060-EVK), which I use for Teensy 4 development.

For projects that are fully under your control, such as imported SDK examples, or anything you created within Eclipse, you wouldn’t necessarily need Compilation Database support.

When working with projects of type Makefile Project with Existing Code, however, Eclipse doesn’t know about preprocessor definition flags and include directories, unless you would manually duplicate them. In large and fast-changing projects, this is not an option.

The lack of compiler configuration knowledge (defines and include directories) breaks various C/C++ tooling features, such as Macro Expansion or the Open Declaration feature, both of which are an essential tool in my toolbelt, and particularly useful in large code bases such as micro controller projects with various SDKs etc.

In some configurations, Eclipse might be able to parse GCC build output, but when I was working with the QMK keyboard firmware, I couldn’t get the QMK makefiles to print commands that Eclipse would understand, not even with VERBOSE=true.

In case you want to check which version your installed IDE has, open Help → About MCUXpresso IDE, click Installation Details, open the Features tab, then locate the Eclipse CDT, C/C++ Development Platform line.

Depending on your build system, this isn’t a problem. For example, Meson/ninja’s compile_commands.json uses command and will work fine.

But, when using Make with Bear, you will end up with arguments by default.

Bear 3.0 allows generating a compile_commands.json Compilation Database with command, but requires multiple commands and config files, which is a bit inconvenient with Eclipse.

So, let’s put the extra commands into a commandbear.sh script:

Then configure Eclipse to use the commandbear.sh script to build:

Verify your build is working by selecting Project → Clean… and triggering a build.

You will know Compilation Database support works when its progress view shows up:

If you have an incompatible or empty compile_commands.json, nothing visible will happen (no progress indicator or error messages).

After indexing completes, you should see: 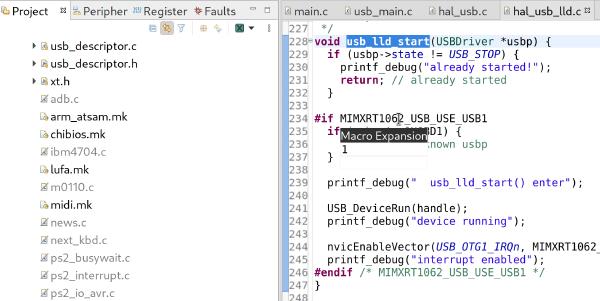 Slow file exclusion in projects with many files

Bug 565457 explains an optimization in the algorithm used to generate the list of excluded paths, which I would summarize as “use whole directories instead of individual files”.

This optimization was introduced later, so in MCUXpresso v11.3, we still have to endure watching the slow algorithm for a few seconds:

The improvements in the newer version would make the setup so much simpler.