Using the iPhone camera as a Linux webcam with v4l2loopback (2020) 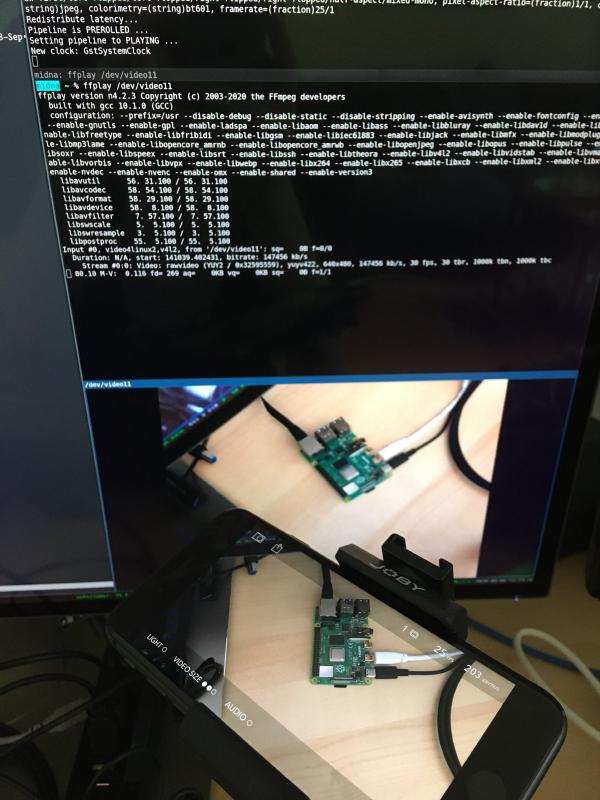 For my programming stream at twitch.tv/stapelberg, I wanted to add an additional camera to show test devices, electronics projects, etc. I couldn’t find my old webcam, and new ones are hard to come by currently, so I figured I would try to include a phone camera somehow.

The setup that I ended up with is:

Disclaimer: I was only interested in a video stream! I don’t think this setup would be helpful for video conferencing, due to lacking audio/video synchronization.

I’m using the PhobosLab Instant Webcam (install from the Apple App Store) app on an old iPhone 8 that I bought used.

As hinted at in the blog posts, the way the app works is by streaming MPEG1 video from the iPhone (presumably via ffmpeg?) to the jsmpeg JavaScript library via WebSockets.

After some git archeology, I figured out that jsmpeg was rewritten in commit 7bf420fd just after v0.2. You can browse the old version on GitHub.

Notably, the Instant Webcam app seems to still use the older v0.2 version, which starts WebSocket streams with a custom 8-byte header that we need to strip.

Then, install gstreamer and required plugins. I used version 1.16.2 for all of these:

Lastly, install either websocat or wsta for accessing WebSockets. I successfully tested with websocat 1.5.0 and wsta 0.5.0.

Then, we’re going to use gstreamer to decode the WebSocket MPEG1 stream (after stripping the custom 8-byte header) and send it into the /dev/video10 V4L2 device, to the v4l2loopback kernel module:

Here are a couple of notes about individual parts of this pipeline:

Now, consumers such as OBS (Open Broadcaster Software), ffplay or mpv can capture from /dev/video10:

Hopefully the instructions above just work for you, but in case things go wrong, maybe the following notes are helpful.

To debug issues, I used the GST_DEBUG_DUMP_DOT_DIR environment variable as described on Debugging tools: Getting pipeline graphs. In these graphs, you can quickly see which pipeline elements negotiate which caps.

I also used the PL_MPEG example program to play the supplied MPEG test file. PL_MPEG is written by Dominic Szablewski as well, and you can read more about it in Dominic’s blog post MPEG1 Single file C library. I figured the codec and parameters might be similar between the different projects of the same author and used this to gain more confidence into the stream parameters.

I also used Wireshark to look at the stream traffic to discover that websocat and wsta garble the stream output by default unless the --binary flag is used.