Ever since I moved to Zürich, I wanted to get a fiber internet connection. I’ve lived with a 6 Mbps DSL line at my parent’s place for about 10 years, so I was looking forward to a lot more Megabits and a lot less latency. For reasons that I won’t go into in this article, it took me about a year to get a fiber connection, and in the end I had to go with Swisscom (instead of init7 on top of EWZ).

But then fiber7 launched. They provide a 1 Gbps symmetrical connection (Swisscom provided a 1 Gbps/100 Mbps down/up connection) for a lot less money than Swisscom, and with native, static IPv6.

A couple of people are interested in how fiber7 performs, and after being connected for about 2 months, I think I can answer this question by now :-).

I started running smokeping to see how my internet connection performs back when I was with Swisscom, because they had some routing issues to certain networks. This would manifest itself with getting 50 KB/s transfer rates, which is unacceptable for image boards or any other demanding application.

So, here is the smokeping output for google.ch during the time period that covers both my Swisscom line, the temporary cablecom connection and finally fiber7: 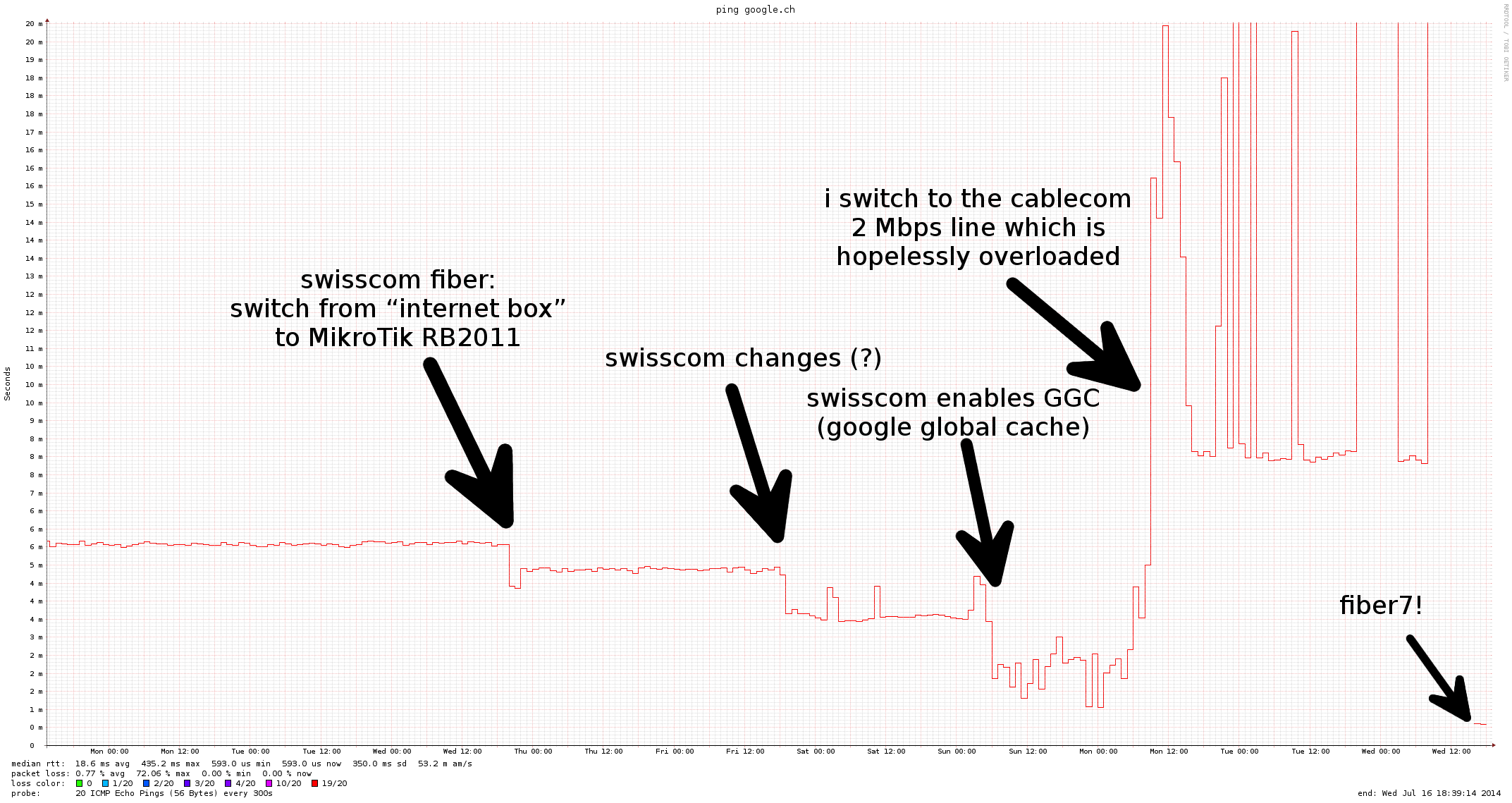 What you can see is that with Swisscom, I had a 6 ms ping time to google.ch. Interestingly, once I used the MikroTik RB2011 instead of the Swisscom-provided internet box, the latency improved to 5 ms.

Afterwards, latency changed twice. For the first change, I’m not sure what happened. It could be that Swisscom turned up a new, less loaded port to peer with Google. Or perhaps they configured their systems in a different way, or exchanged some hardware. The second change is relatively obvious: Swisscom enabled GGC, the Google Global Cache. GGC is a caching server provided by Google that is placed within the ISP’s own network, typically providing much better latencies (due to being placed very close to the customer) and reducing the traffic between the ISP and Google. I’m confident that Swisscom uses that because of the reverse pointer record of the IP address to which google.ch resolves to. So with that, latency is between 1 ms and 3 ms.

Because switching to Fiber7 involves recabling the physical fiber connection in the POP, there is a 2-day downtime involved. During that time I used UPC cablecom’s free offering, which is a 2 Mbps cable connection that you can use for free (as long as you pay for the cable connection itself, and after paying 50 CHF for the modem itself).

As you can see on the graph, the cable connection has a surprisingly good latency of around 8 ms to google.ch — until you start using it. Then it’s clear that 2 Mbps is not enough and the latency shoots through the roof.

The pleasant surprise is that fiber7’s ping time to google.ch is about 0.6 ms (!). They achieve such low latency with a dedicated 10 gig interconnect to Google at the Interxion in Glattbrugg.

Let me say that I’m very happy with the performance of my internet connection. Some of the measurements where packet loss is registered may be outside of fiber7’s control, or even caused by me, when recabling my equipment for example. Overall, the latency is fine and consistent, much more so than with Swisscom. I have never experienced an internet outage during the two months I’ve been with fiber7 now.

Also, while I am not continuously monitoring my bandwidth, rest assured that whenever I download something, I am able to utilize the full Gigabit, meaning I get an aggregate speed of 118 MB/s from servers that support it. Such servers are for example one-click hosters like uploaded, but also Debian mirrors (as soon as you download from multiple ones in parallel).