Anecdotes about getting a DSL connection (2013)

I recently moved to Zürich and therefore needed a new internet connection. I am given to understand that fiber will be available at my place in a few months, so I chose to go with a provider that will allow me to eventually switch to fiber once it’s available.

That choice makes me an oddball; normally people go with cablecom, who offer speeds of up to 150 MBit/s here. If I had gone with cablecom, too, I would not have written this article :-).

So, for a DSL connection, you need a phone connection. I ordered the cheapest one and got a letter from Swisscom telling me that they will connect my phone line at 2013-05-02. Normally, you provide them the name of the previous tenant and they will just switch your existing line. Since my previous tenant didn’t have a phone (remember, cable is popular here), this was more complicated: I needed to call an electrician who would connect my apartment to the Hausverteiler (demarcation point).

I found an electrician who would come to my place at 2013-05-02 and connect my line for a fixed rate of 180 CHF (≈ 150 €). Quite a bit of money, given that Swisscom said it should be something like 50 CHF. I called another electrician who quoted similar rates, so I didn’t bother to cancel the existing appointment and look for a cheaper one. Later on, I found out that 180 CHF for everything was probably a pretty good deal.

When the electrician arrived, he unmounted the phone plug socket, connected some kind of tone generator and started measuring where the lines go. He wasn’t able to trace the lines along the walls, so we went to the basement instead. There, we were unable to find the demarcation point. We checked every room multiple times, asked the other tenants (who did not know either) and even went over the the neighbor’s house to look at their setup.

After a while, the electrician decided to call the building management and ask for help. They couldn’t answer the question either, but promised they would check the next day. He then called Swisscom and requested some plans, which he got, but they didn’t help us either. At that point, he was at my place for about an hour and decided to come back tomorrow, since he couldn’t do anything else. 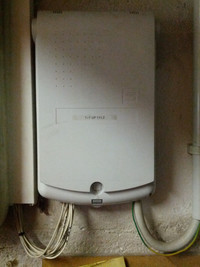 After this problem was fixed, it should have been straight-forward. But it turns out the demarcation point is a mess (are all of them like this?). We tried to measure which line goes to my apartment with the tone generator again, but no luck. We then went back to the level in which my apartment is in and uncovered the hole for cables in the wall, where we figured out that there actually is no connection going from my apartment to the basement — the wires were cut. 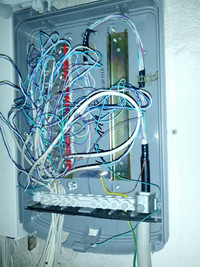 Luckily, the electrician was able to find another pair of cables going to the basement and connected them. I can just hope that this wasn’t the phone line of another apartment, but I received no complaints for two months now. At this point, we could detect a signal in the basement and the electrician connected the line to the corresponding connector. Everything should work now, and he verified that by measuring that some voltage arrived in my apartment, given that I did not have an actual phone to connect to this line.

So I then connected my DSL modem and tried to connect, which didn’t work, even after resetting the whole thing and waiting for many minutes. The electrician guessed that Swisscom might not have connected the line yet and suggested I should call them. Then he left, after spending about 2-3 hours in total at my place for a task that should’ve been done in 30 minutes tops.

On the phone, my provider told me that there was some problem with connecting the line on Swisscom’s side and they are hoping to get it fixed within the next 10 (!) days. Great.

No signal at my neighbor’s place, too

The next day, my neighbor rang the doorbell and asked whether I had issues with my phone, too. Hah. It turned out that the guy is actually the son of an old lady living in the house and wasn’t able to reach her via phone for an entire day. That’s a problem because the old lady is pretty sick and relies on a phone. So I told him that recently there was an electrician at this place who connected my internet line and he might have broken something in the process. It was a public holiday, so we could not reach the electrician.

We then brought one of the old lady’s spare phones upstairs to see whether my phone line was actually working. Turns out, it’s working, which is good. However, when dialling out, I had the number that belonged to the old lady. Not good.

Given that the heater room in the basement was still unlocked, I figured I could have a look myself and see whether the mistake is obvious or not. Given that I didn’t had my goods shipped to Zürich at that time, I had no electronic spare parts available and had to improvise :-).

MacGyver would be proud 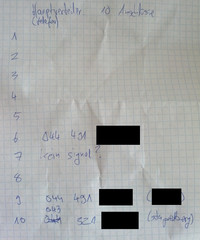 The phone I had borrowed has a TT89 Reichle-Stecker (it’s a swiss thing), which obviously is not very useful when you want to test the lines in a demarcation point. Luckily, the DSL modem shipped with a splitter that had a two-wire input and an RJ11 output. They also shipped an RJ11 to TT83 adapter. So I connected the phone to the adapter to the splitter and then unisolated one of my ethernet cables with a scissor to get two wires.

Equipped with that adventurous testing device, I connected the phone to each line, dialed my mobile phone and noted the number the call came from.

After trying all the lines, I figured out there was an off-by-one error: Swisscom said my line was supposed to be the 9th connection, but it needed to go into the 10th. I then swapped the wires and voilà — I have my number in my apartment and the old lady has a working phone again. 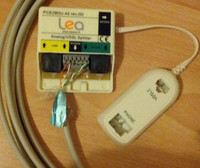 A few days later, my internet provider called and told me that swisscom would connect the line the next day. And this time, it actually worked: the modem synced and I had an internet connection. Of course, it only reaches about 15 MBit/s instead of the “available” 50 MBit/s, but everybody is used to that, right? Since I had all the equipment still lying around, I even tested it directly at the demarcation point, to make sure it’s not the crappy lines going into my apartment. But no speed increase there, either. In the end, my provider agreed to downgrade me to the 20 MBit/s option, so at least it’s significantly cheaper.

What’s the moral of the story? Physical connections to the internet are still surprisingly hard. It’s been 14 years since I first connected to the internet via DSL, and nothing has changed (for me!). Hopefully, we all have fiber soon, and stories like this one will be a thing of the past.